Navigate through TEIMUN How To’s & Blogs

How to Love Public Speaking

Whether you are in an argument with your family, at work, or in a debate: knowing how to argue and convince others of your point is always useful. Rhetorical theory, especially with regard to body language and voice is necessary in order to excel at debating. Ethos, pathos, and logos are crucial in debating as well, as they are the classic way to form an argument. To understand these concepts, read this article, before diving into the art of debating!

The base of any debate is convincing someone that the given view on a topic is important and should be considered or even shared. This can be achieved by having strong arguments to prove your given point. The better the argument, the more likely it is for you to get your point across and convince your target. Before looking at the debate itself, it is important to understand the theory behind good arguments; how they are constructed logically, and how to detect flaws.

An argument always consists of one or more premises, and a conclusion. Each of the premises and the conclusion can be either true or false, but never both.

Unfortunately, debating is more complicated than giving ‘true’ or ‘false’ arguments. That is why there is a second type of argument:

As shown in the examples, inductive arguments rely on probability and are not certain. Since the corresponding data is responsible for the strength of your argument, choose it wisely in order to form a solid inductive argument.

Using a model supports separating different parts of an argument, allowing for better analysis and focus on individual components, ultimately leading to better preparation for debates. The well-known model by Stephen Toulmin (1922-2009) called the ‘Toulmin model’ focuses on the justification of argumentation, rather than making inferences based on a set of premises.

The claim is the statement which the author would like to prove to the audience. In other words, the main argument or conclusion.

The grounds are the evidence to back up the claim. This is often data, research, or facts making the case for the claim.

The warrant is the link between the grounds and the claim. This is where the author states how the evidence and the claim are connected. This can be implicit or explicit.

To illustrate how to apply these concepts, following is an example of the three concepts filled in:

In this example, the warrant could also be implicit (left out), since the connection between the grounds and the claim are apparent.
Besides the three main elements, three additional elements can be added to make a argument stronger:

Backing gives additional support to the given claim, therefore certifying the statement presented in the warrant. Sometimes, the warrant by itself might be not convincing and should be backed up with some evidence.

The Qualifier defines the limits of your claim since it might not be true in all circumstances. Using words like “presumably”, “some”, and “probably” helps the audience understand the situations in which your claim might not be valid. This adds to the credibility of your arguments and your credibility as a speaker (read our article how to improve credibility).

The Rebuttal is where the author addresses opposing views. For example, there could be another (even an unlikely) explanation for the evidence contradicting your claim. By acknowledging other opinions on the issue, you help build your ethos as a speaker. In this way, the audience can see you as an open-minded thinker accounting for other explanations and not fixed on their perspective.

Following is an example of the entire Toulmin model filled in: 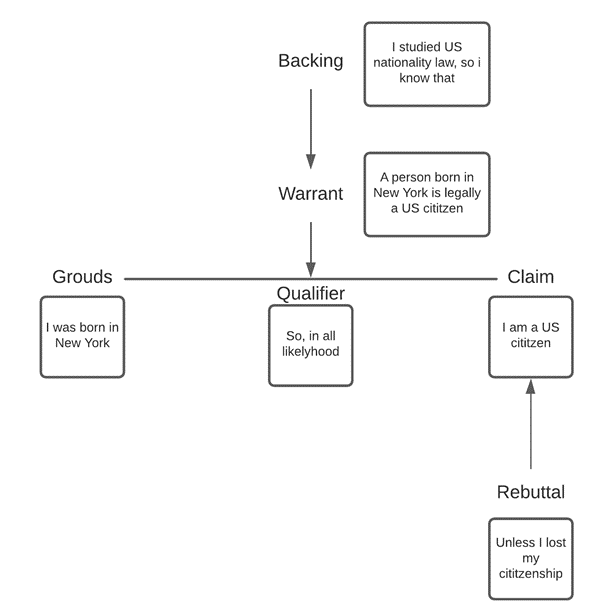 While Toulmin’s model is essential for making good arguments, there are more theories that need to be applied in order to have a good debate:

Fallacies - What to Avoid

A fallacy is the use of illogical or otherwise faulty reasoning in constructing an argument. Fallacies can be intentional to make arguments appear better to the audience than it actually is, or unintentional due to inattention or incomprehension. They are often difficult to notice, so stay sharp during the debate to see them. The list following list provides an overview of the most common fallacies:

Example:
Person 1: ”I think pollution created by humans contributes to climate change.”
Person 2: ”So, you think humans are directly responsible for extreme weather, like hurricanes, and have caused the droughts in the southwestern U.S.? If that is the case, maybe we just need to go to the southwest and perform a rain dance.”

By exaggerating, misrepresenting, or completely making up an opponent’s argument, it becomes easier to attack it, and present your own position as reasonable. But since one is attacking an argument that didn’t exist in the first place, it is like “attacking a straw man”.

People often confuse correlation (two things happening at the same time or in sequence) with causation (one event is contributing to the occurrence of the other).

Example: “I ate the spaghetti and now I am sick, therefore the spaghetti must have made me sick”. Without more evidence, there is no reason to assume that the spaghetti actually caused me to be sick. It could be caused by different factors.

A faulty generalisation happens when someone reaches a conclusion from weak premises. Characteristic of this is generalising. One might be:

Generalising hastily – reaching an inductive generalisation based on insufficient evidence

A slippery slope is a course of action that seems to lead inevitably from one action or result to another with unintended consequences.

Example: ”If we allow same-sex marriage, we will ultimately allow people to marry their parents, pets, or car.”

An argument which is said to be true because most of the population believes in it. The flaw in this argument is that the popularity of an idea has no bearing on its validity.

Example: ”Everyone is driving over the speed limit, so it shouldn’t be against the law.”

This fallacy occurs when someone is attacking the person making the argument (traits, character), instead of the argument itself. The argument should always be seen as independent of the person putting it forward.

Example:
Person 1: ”You should really stop smoking, it’s damaging your health.”
Person 2: ”But you are smoking as well, you can’t tell me to stop!”

A red herring is an argument that distracts from the original topic and tries to shift the focus to something unrelated.

Example: “When you start saying things to me like I need to eat healthier or get more exercise, that tells me that you think I’m fat. I like me, and I like the way I look and more people should have better self-esteem.”

Preparation beforehand is essential for a successful debate. Following are some tips on how to prepare a debate:

While debating, try remaining relaxed and confident. Remind yourself to speak in a clear and easy-to-understand manner. Furthermore, observe how your opponents try linking their evidence to their claim: is their evidence valid? Is the warrant valid? How do they back up their warrant? What other explanations could be valid? Are they overgeneralising? Do I want to convince them or prove that they are wrong? Additionally, pay attention to whether the opponents stick to the core of the debate. Often people try to hang on minor details in arguments to get into a long discussion that is going nowhere to distract and lead away from the core of the argument. Stay focused and as much on-topic as possible. And last but not least, have fun while arguing and acknowledge the arguments from the other side. You can still learn something from your opponent, might it be about the topic itself, how to bring your point across, or how to improve your body language.