MUN 101: The Rules of Procedure

MUN 101: The Rules of Procedure 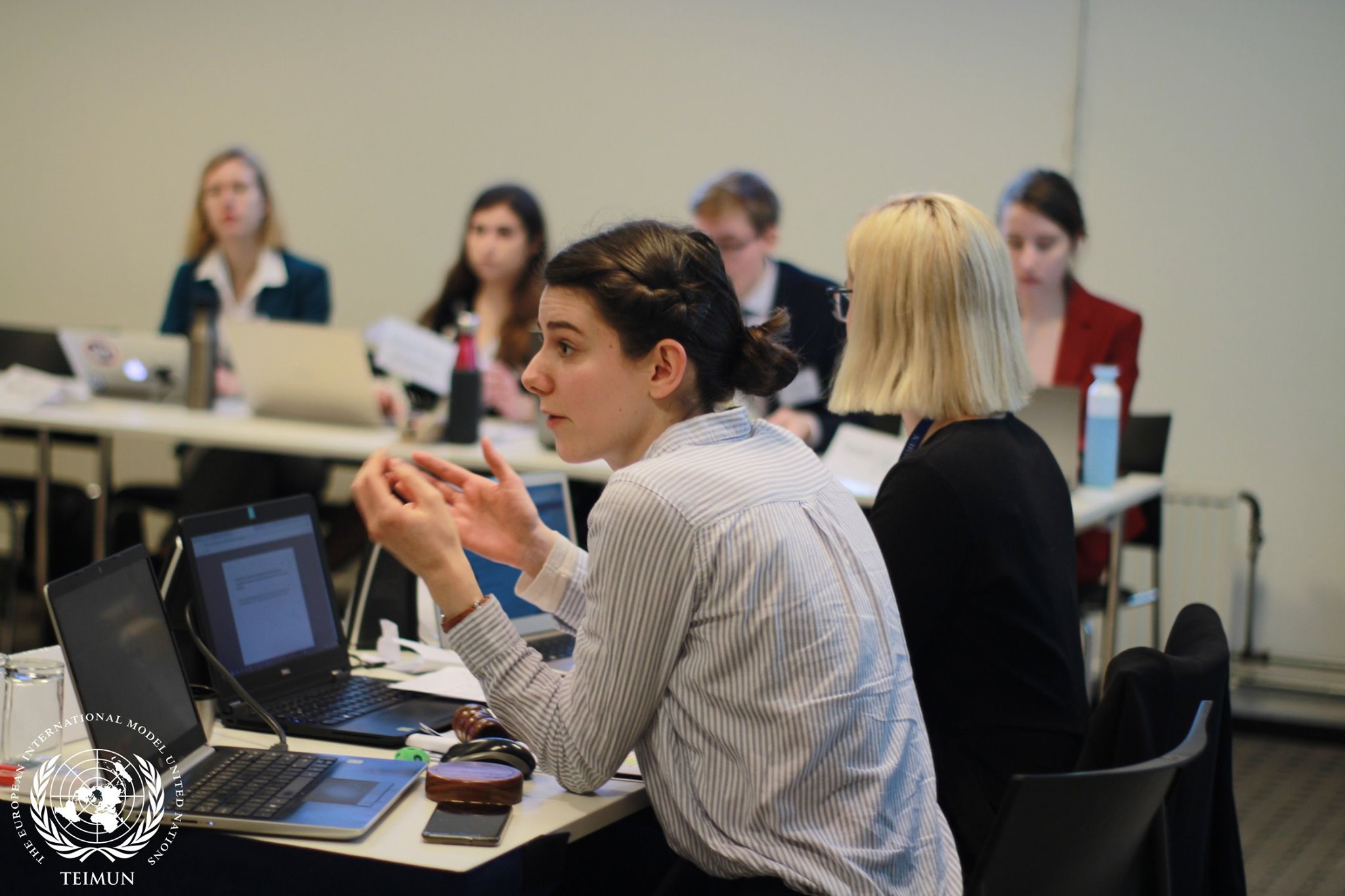 The Rules of Procedure – Your Guide into the Unknown

Have you ever sat around at a Party, comically trying to get a word in as everyone around you talks over each other, animated in discussion? Frustrating, right?

While we can allow such situations to happen surrounded by those we call close companions, putting this onto a larger scale like the UN reveals a lot of problems – as discussions without any law involved could only lead to chaos. That’s why we need Rules of Procedure.

At the end of the day, without order, nothing really can get done. Hence, the RoP were created to provide governance over debates, ensuring that discussions are maintained in an honourable and secure way. Depending on the MUN that you are taking part in, they might slightly change, so it is always best to check out the Rules of Procedure Booklet that your MUN provides. But even without that specific book, we can teach you some of the most pressing rules today, so keep on reading!

The Ground Rules
An MUN can normally be separated into different parts of the discussions, which all have their own functions in furthering a topic. As they perform differently, the rules within these procedures differ slightly as well.

Structurally you have:
1. The Opening of the Debate

We all gotta start somewhere, right? Within Model United Nations, the Roll Call is normally used to check who is attending, and how many people are attending. Through this, the Chairs are able to calculate the majority which is required within procedural and substantial voting. When you hear your Countries name, you can simply reply with “Present.” If you want to spice things up, and declare how serious you are about the topic that is being discussed, you can also say “Present and Voting.” But beware! This comes at a cost. If you use “Present and Voting.” you are NOT able to abstain during substantive votes, meaning you have to truly have an opinion on a matter.
Once the list has been read, you continue to the next Step.


Opening the Debate: Setting the Agenda

Depending on your MUN this process may differ. Sometimes you will be given one subject before entering the debate, in which this part is technically unnecessary. If you have been given multiple possible topics to discuss however, it will depend on you and the other delegates which one will be chosen. You should be careful with these things – depending on your country and their positions, you might have a certain preference for one topic, therefore you should really try to get the discussion topic which fits you best off the ground. Setting such an agenda, requires a motion.

You raise your hand/placard (if your MUN provides placards, use placard) , and wait until the Chair acknowledges you. You ONLY speak, if the Chair acknowledges you. This is a universal rule, which is present in all sections of the MUN debate (except for the unmoderated caucus). Once you have been acknowledged, you say your country’s name and move to place your preferred topic first on the agenda. Remember to always speak as an ambassador of your Country. No “I’s” allowed! It’s “we”, your country’s name, or “as the representative of Country Name.”

Some MUN’s choose to have a brief discussion between two representatives of the two different topics, if there is no clear preference. Either way, once a motion has been raised, the Chairs will call for a procedural voting process, meaning that delegates are unable to abstain and MUST vote. Only a simple majority is needed.

Huzzah! A topic has been raised, the Countries have been counted. The actual Debate can now proceed.

Once a topic has been chosen, each state’s delegate, according to the alphabetical order of each State present, will give an opening speech in which they briefly outline their opinion on the matter at hand. Within your opening speech, you can: position yourself with like-minded countries to already try to secure an alliance and raise specific themes within the topic that your country particularly cares about. This is your moment to steer the discussion in a way that benefits your country. As you listen to the other Countries opening debates, it may be a good idea to make some notes, to see who cares about what aspect of a problem, and who you might find yourself to be in agreement or disagreement with regarding certain issues. This is really useful for later on when you have to create Draft Resolutions with other Delegates. Once this process is over, the discussion will move on to the General Speaker’s List.

The GSL is essentially your default section within a discussion. Chairs will establish a time limit that each speaker should adhere to, and Countries can then ask to be added to the list, taking turn to speak in the order the Chairs have provided.

Within the GSL, a delegate can aim to move the debate into a direction they would like to see, this is your moment to look for people who would vote for you, if you were to raise the motion for a moderated Caucus. Others might disagree, and are able to answer you within their time frame on the GSL. To join the GSL, you wait for the Chair to ask who wants to be added to the list, at which moment you should raise your placard, until they acknowledge you. If you finish your speech before your allotted time is over, the Chair may open the remainder of the time for other Delegates to ask you a question, which you then are able to answer, you may let your time seize, or you may give your time to another Delegate. What the best choice is truly depends on your tactical reasoning for it.

While the GSL is ultimately a tool to allow general discussions, sometimes one needs to spend more time on certain specifics, in which case one can call for an unmoderated or moderated caucus. A moderated caucus requires speakers to only hold speeches based on the topic at hand. It might be fruitful to raise a motion for a moderated caucus on a certain topic (for a certain amount of minutes, with a certain amount of speakers time), if, within the GSL, a trend towards such a topic was already foreseeable. This is an opportunity to really shape the debate, and more often than not, multiple motions for multiple moderated caucuses exist at the same time, so voting is necessary. Pro Tip: Normally the longer motion takes precedence within a voting procedure, and the secondary motion will only be voted on, if the first one doesn’t get enough votes. Hence, it’s not a bad idea to make your own motion just a tad bit longer than the others. Being tactical is key within the MUN World!

Now, an unmoderated Caucus is a whole other tactical game. Within it, general rules seize to exist for a while, and one is able to be within a freeform debate, no turns, no points, no speaking time, You are allowed to move around within a room , you get to meet the other countries in a more personal manner, and you get to negotiate and write your draft resolutions. This is where you look for cooperation amongst other states and try to create something based on your shared values. Like the moderated caucus, a motion for this has to be raised. It’s a procedural vote, so no abstaining is possible. The unmoderated caucus takes time for as long as the allotted time allows.

Ah, Draft Resolutions. The big bad of the MUN world. Having to write a document which follows its very own rules, uses a specific type of language and is generally supposed to be very professional in how it is handled sometimes really makes people want to turn on their tail. Understandably so! Now, this article isn’t specifically here to teach you how to write a draft resolution, but we would always recommend doing some research on this matter before participating in writing one. Sure – you could always make someone else do it, but it’s an open secret within the MUN World, that the one holding the laptop, and writing the document is King.

Now- What really is a Draft Resolution? A draft resolution is a document which states the proposed solution of the issue at hand and is supposed to be representing the viewpoints and the agenda of those who have written and signed it. It must have a minimum number of sponsors who support it and will vote in favor of it, once debates have ended. The number of necessary sponsors differs based on the Council and the Chair, according to the size of a Committee.

Once a draft resolution is finished, it should be sent to the chair who will then hopefully approve it, at which point a motion may be raised to introduce it to the rest of the Council. You then get to read the operational clauses, one by one, within a certain time frame. Afterwards, countries are able to ask for amendments regarding the clauses you have written. If an amendment is friendly, that means no one has objected to the change within a clause, and it can be written anew accordingly. If a sponsor however should decide to object, a vote must follow.

Amended clauses are unable to be re-amended, so make sure you truly do not object to a change being made within your resolution.

For a draft resolution to be voted for, the GSL must first be closed, hence one must either wait until the GSL list runs its course, or one must raise the motion to close the debate. If two-thirds agree and are in favour, the debate will end.

If there is more than one draft resolution on the table, the committee will vote on the one which had been handed in first, based on their serial number. Hence, it’s also important to act quick in getting together a group and writing a professional and well worded Draft Resolution.

The Committee then votes on the Draft Resolution.

Voting Procedure:
The voting procedure is a substantive vote for everyone except those countries which said that they are “Present and voting.” Meaning, that everyone who said that they are present at the Roll Call gets to either vote “Yes”, “No”, or gets to abstain. You are furthermore not allowed to abstain if you are a sponsor for the draft resolution at hand.

Once voting is completed. and a proposal has been passed, it becomes the resolution of the committee, at which point the council will move on to the next topic that was on the agenda. If it should however fail, the draft resolution next to the first one will be voted on. Once one has been approved, or all have been voted on, one moves on to the next topic.

To gain a more specific view of the different Motions one can raise within MUN, we would  furthermore invite you to read this article about it!