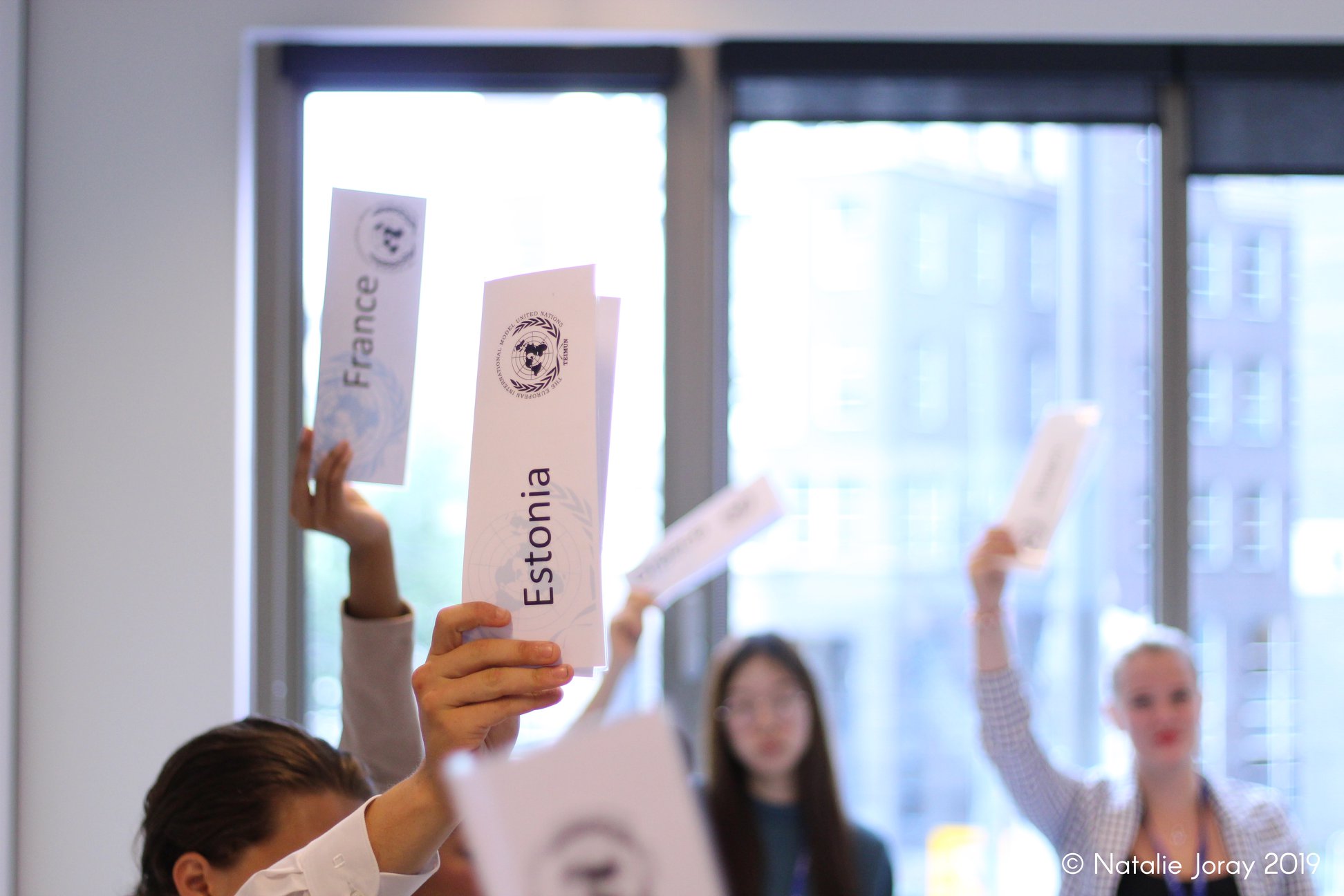 Being part of MUN’s sometimes feels like being part of a secret society, in which everything seems to be talked about in code. What is the difference between a Submitter and Signatories? How does one divide a question or a House? Who are the P5 and why do we fear them? Taking a role in Model United Nations means using language which is heavily specific to the tasks at hand, meaning that they really are not terms one would easily come across in day-to-day conversations.

The following MUN Dictionary is supposed to teach you all the vocabulary you might need to know for your upcoming council meeting!

Delegate: A delegate is the basic term for a participant of an MUN conference. Representing a specific country in one of the different Councils present, their primary goal is to steer discussions into a direction that will assure that their goals being met in Draft Resolutions.

Delegation: A group of delegates, often times representing a team of a university, or another MUN. Usually part of the same institution, and divided into different councils.

Placard: The sign signifying your country. Used within voting to showcase ones presence and to signal towards a chair.

Chair: Chairs are your essential referees. Using the Rules of Procedure, they facilitate the debates.

Gavel:The almighty hammer swung by a chair during decision making. If you hear its clamouring thud, you better listen!

Out of Order: Actions which are a big NO-NO. If something is Out of Order, it falls outside the RoP.

Position Paper: Your personal religious text of choice. This text is normally written by a delegate and summarizes how their country understands the issue at hand. It includes a countries connections, criticism, their personal beliefs and what they would like to achieve within debates in the long run.

RoP (Rules of Procedure):Your religious text of choice 2.0. The Rules of Procedure entail the rules of how the MUN you are partaking in is run. These can change slightly from MUN to MUN, so it is never a bad idea to read through them.

Motion: You want something? You motion for it. Motions are a way to officially channel requests and to guide the conversation into a direction which you personally would favour. Oftentimes these have to be voted upon.

Simple Majority: Over 50% must vote in your favour for the vote to pass.

On the Floor: When something is open for discussion and/or voting. This can entail motions,draft resolutions or working papers.

Board of Directors: within TEIMUN, The Board of Directors is the team that has organized the MUN Conference you are partaking in. This includes Programme Coordinating, PR, Fundraising and internal work through the roles of President and Secretary,

Secretary General: Head of the Secretariat that is organinzing the academic part of an MUN, as well as the delegation, recruitment and the management of Chairs.

Under Secretary General: Works together with the Secretary General, the role varying from MUN to MUN. Often times the department-head of an MUN Conference, regarding for example academics, chairing etc.

Point of Inquiry: Sometimes the RoP can be a bit confusing. A Point of Inquiry is normally a question of a delegate to the chair in regards to understanding a rule and how this rule should be used,or any other thing within the committee that theymay not understand perfectly well.

Point of Information: Points of Information are used most often after the speech of a delegate, by another delegate, if something might need clearing up.This Point is however not used within every MUN, and sometimes will be mashed in together with the Point of Inquiry.

Point of Personal Privilege: The Name is the game with this one. If you have a question and it regards your personal problem, feel free to use this Point. That entails bathroom breaks, asking for another power outlet, needing to change clothing because you spilled something on yourself, etc, etc.

Point of Order: If you notice someone not following the Rules of Procedure, be it another delegate or even the chair, this is how you can call them out. This Point can prove to be rather important if a rule break would have heavily influenced the flow of a session.

Right of Reply: Sometimes debates can get heated, which might end with certain delegates or countries getting called out in a rather rude matter. If the Chair approves, the insulted party will gain the opportunity to respond to insults directed at them.

Clause: A clause is an instruction which details the policies one plans to implement once a resolution shall be passed

Working Paper: Normally a first draft including first ideas of what the clauses should entail. Normallywritten by a block of delegates who roughly agree on ideas

Draft Resolution: The final draft of a working paper which has both proper formatting and content, so that it may be approved by the chair. Once it is approved it will be discussed and voting can start.

Sponsor: A major contributor of a draft resolution is its sponsors. They will be named within the document and often one of them will be the one introducing it within the council. Limited amount.

Signatories: Unlimited Amount. As a signatory one essentially signals that one stands behind what the document says. A way to show support towards a Draft Resolution.

Preambulatory Clause: Explanatory clauses which showcase why one has decided on the policies one mentions within the operative clauses. They can give context as to the reasoning, explain a problem,showcase data etc. Normally italizedand not numbered.

Operative Clause: Numbered clauses which detail policies which are implemented to solve the conflict at hand.

Amendment: Amendments are used to change policies provided, add new ones or erase sections and clauses which others might not agree with.

Friendly Amendment: An amendment that the sponsors can agree on and that, thus, gets added immediately to the document.

Unfriendly Amendment: An amendment that sponsors disagre with,and that needs to be voted opon.

Panel of Authors: An Opportunity for the main contributing members of a draft resolution to showcase it to the rest of the committee.

We hope that having this Overview might help you in the future!